A Fungi to be with, Banana Wrap, Wonder in the Mundane.

New posts announced on Twitter @ pwhorticulture
Best viewed on a screen bigger than a phone.

'The Garden I Work In'  - an everyday  story of gardening folk. 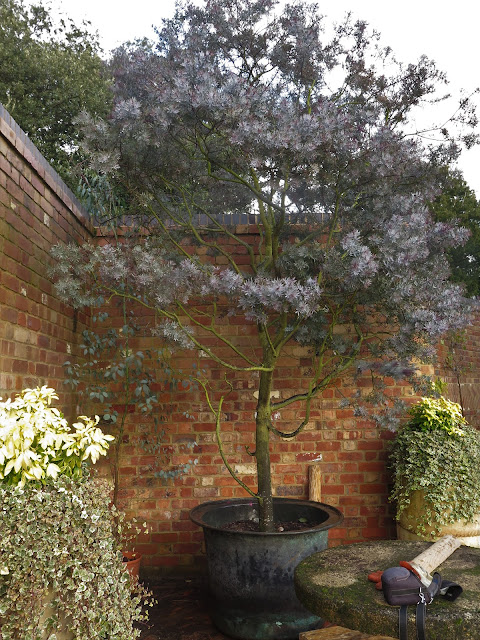 This Acacia has been in its pot for three or four years  and usually gets  dragged into the greenhouse  about now  to make  sure it survives the winter. Last year we decided  it was too big to lug undercover so we left it out in this sheltered corner and it came through okay so this year it is being planted out in the garden. I can't  think   of a better way of  guaranteeing  a very harsh winter.
We chose to do it last Friday despite a  rainy forecast which turned out to be wrong - we had far more rain than was forecast.. 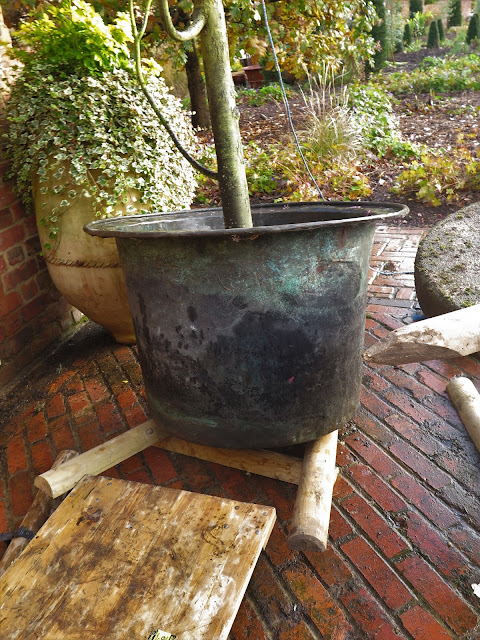 By the careful appliance of science and lots of  shoving, levering, heaving and hauling on the rope we got it onto a small trolley 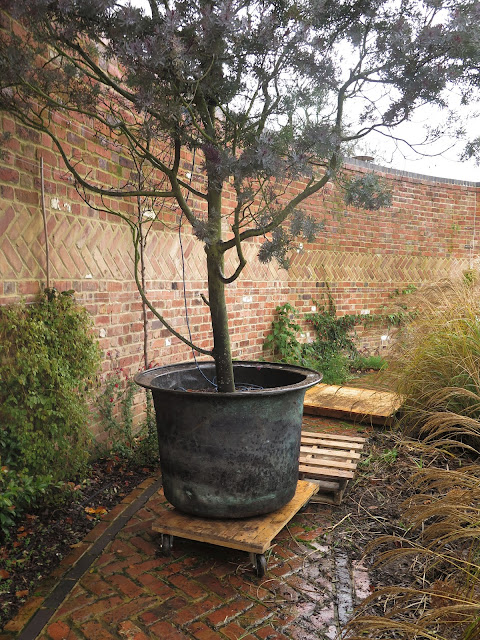 We wheeled it  round that garden to its new site and now we had to get it out of its  pot. 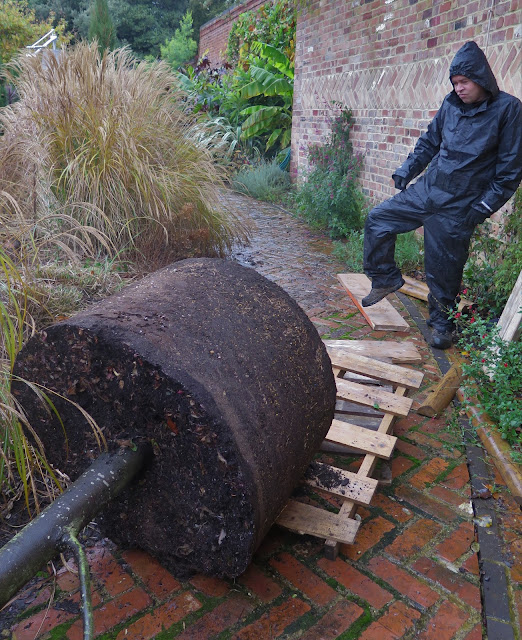 With more bashing, cursing, waggling and gentle pulling with the digger  we got it out. There is a  curious thing about  Dan, whenever we work in the rain he starts break dancing. He is a wizard at it and he is a wizard with the  mini digger too  - a gentle and deft  touch. 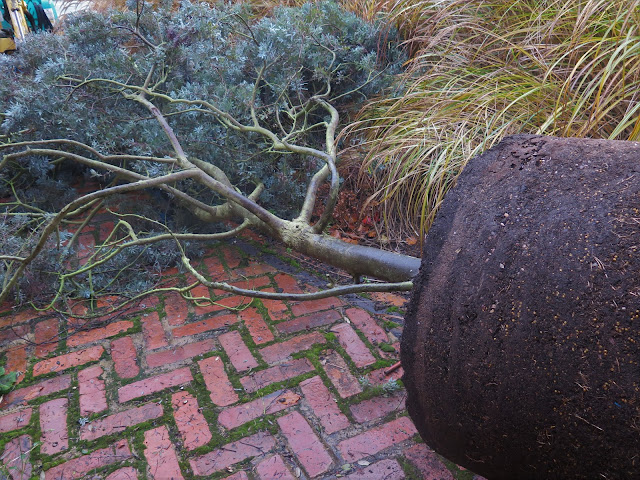 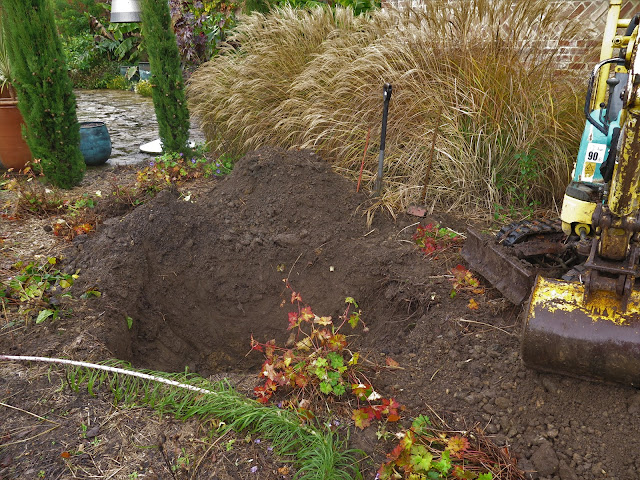 The 'ole.
There was  an almost rock like pan of compacted soil  about 800mm down where the contractors had tracked back and forth  when constructing  the  garden despite being  asked several time so ensure any compaction was  broken up. The  digger was a godsend  because  doing it by hand in the rain on a Friday afternoon  would have meant that the greenhouse would have  been  seriously  at risk from flung tools . 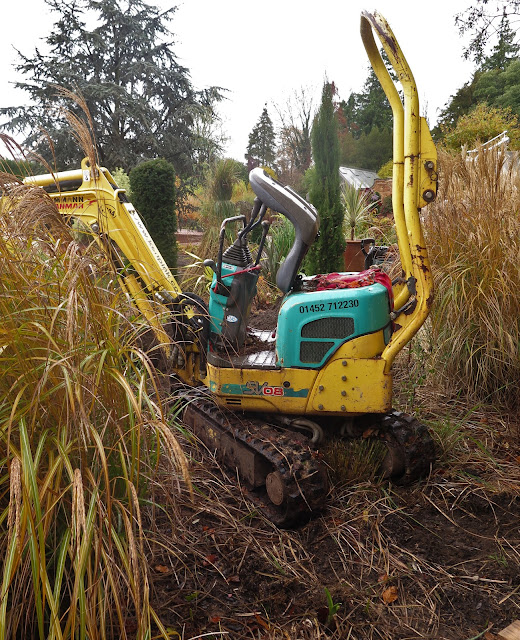 We had to lift  the  plant it into the hole with the digger using Dan's dexterity  and deftness  - Pardon ? I said deftness. 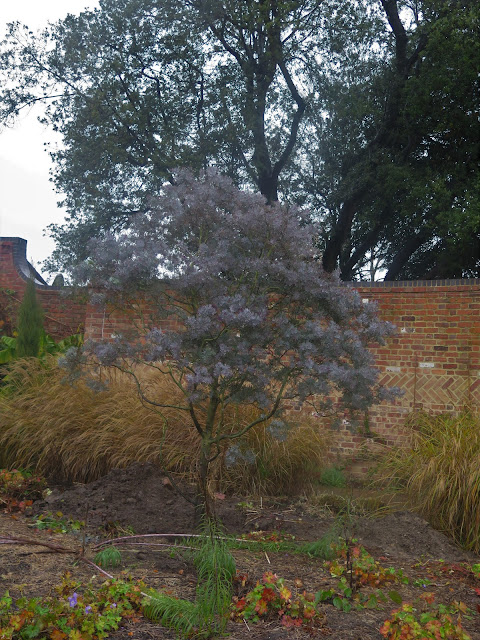 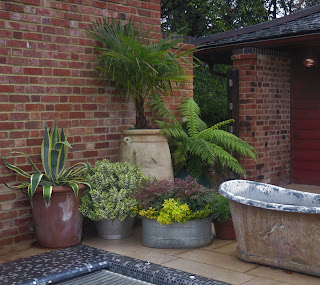 Last year we managed get to get two plants of Ensete ventricosum 'Maurelii ' through the winter outdoors by this method so here goes again. 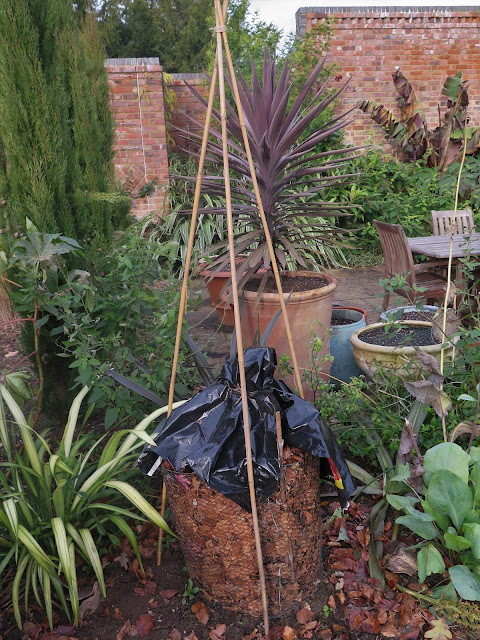 We cut the plant  back  to about 800 mm and then covered the  open crown with a sheet of plastic just enough to keep out  the wet but not too much  to prevent all air flow. a circle of chicken wire stuffed with leaves will hopefully provide some insulation against the cold  for the growing  tip buried deep in the heart of the plant. 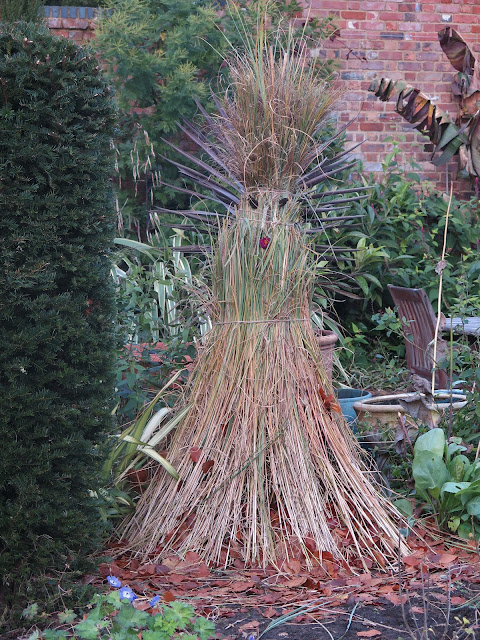 Anyone you know?
We 'thatched' it with Miscanthus that  we had cut from the garden.
It was just asking to have a face put on it. Fortunately it lines up with a purple Cordyline in a pot behind which gives it more of a witch doctor  appearance.
Hey, if you can't have fun in the garden where can you? 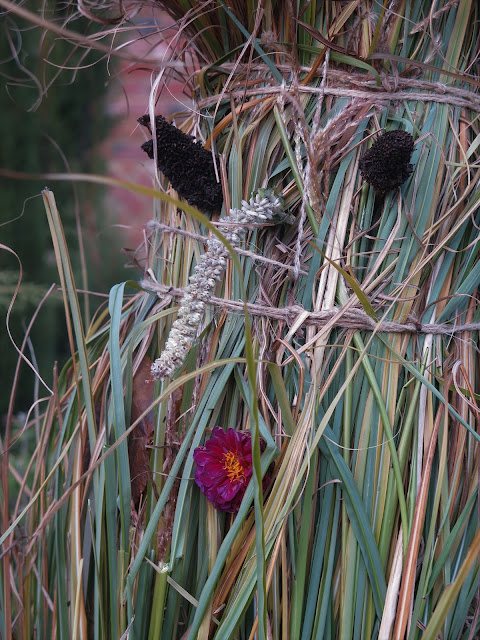 Win a shilling if you can  say what  plants the nose, eyes and mouth are. 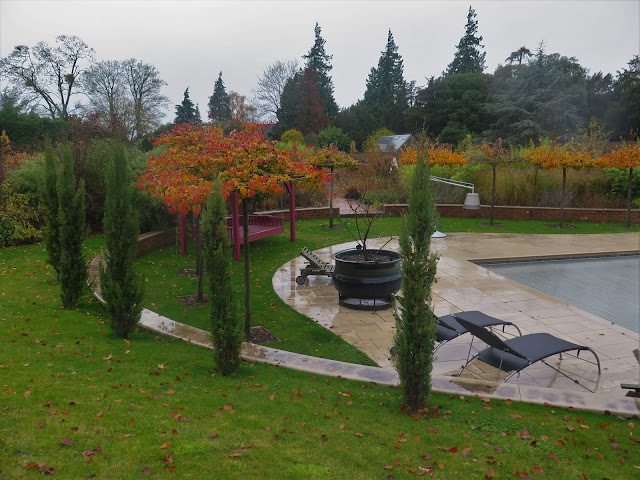 I planted these table top Parrotias  earlier this year.  They will  gradually  be extended to provide some shade for sitting under.
I had  forgotten how good  their autumn colour is.
Top quality plants and service from  Readyhedge when I bought these plants - thanks guys.

Wonder in the Mundane.

If you work,  or  are  simply out an about, in the outdoors  there is always something that will stir  your sense of curiosity or satisfy your need  for visual stimulation , sometimes to the point of satiation and sometimes even  to the point of tears
I went out with the chainsaw to get a pile of wood  cut into logs  to move into the dry and came across these beautiful lichens and fungi.
Just keep your eyes and mind wide  open.
The wood was birch, beech, Leyland cypress, yew, iron hard laburnum - lovely chocolate centre  but like trying to cut through steel once it has  seasoned  -  and some cedar. 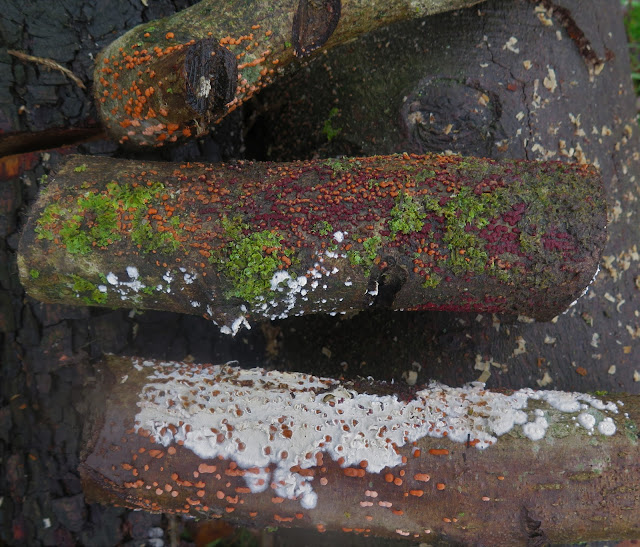 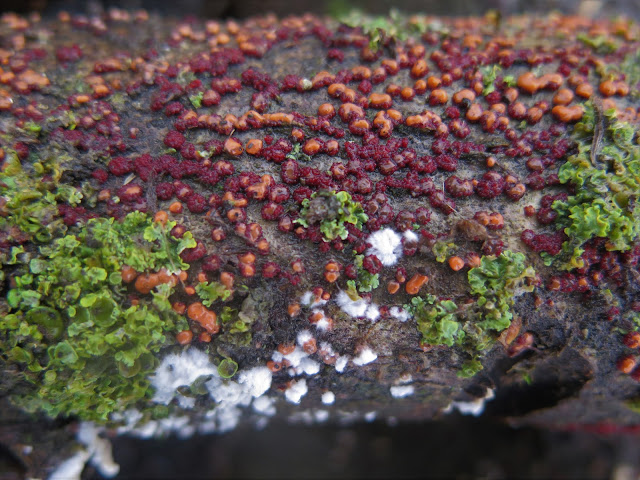 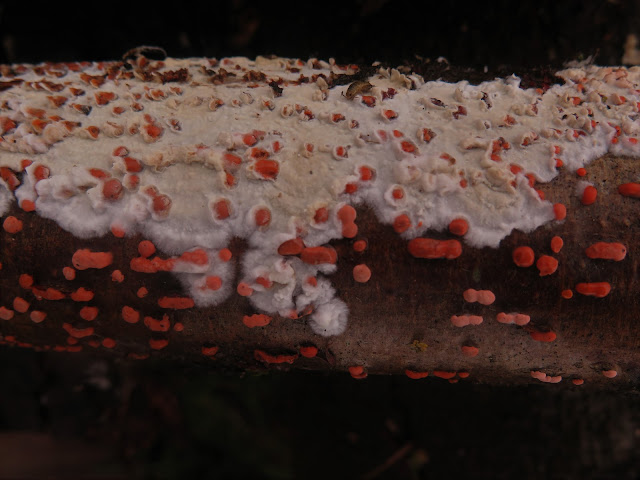 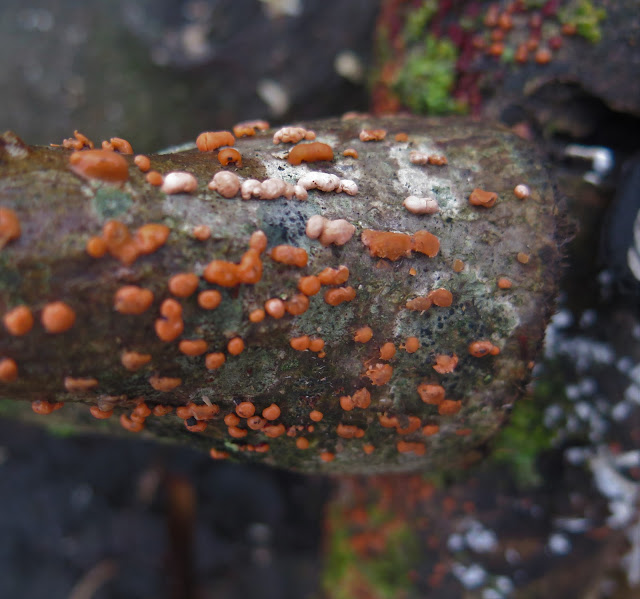 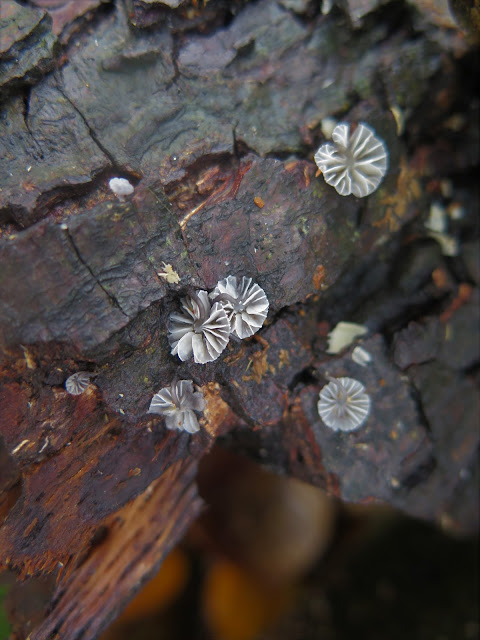 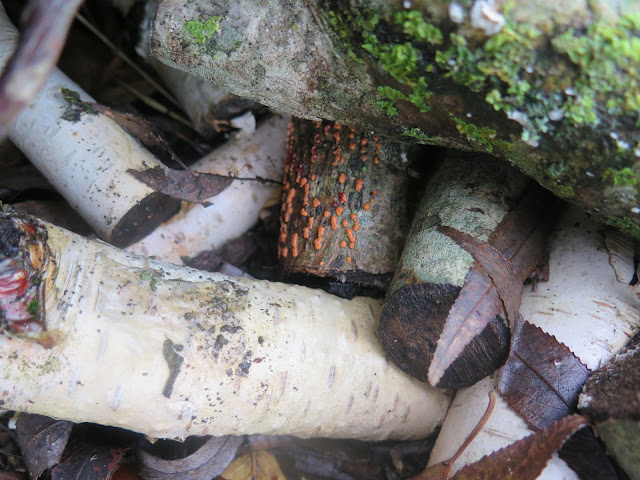 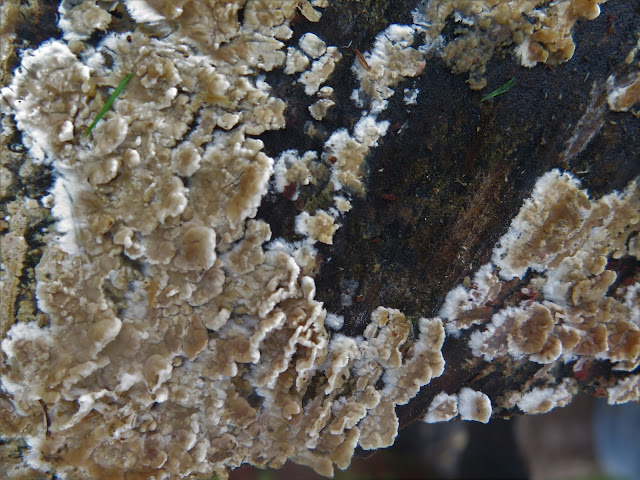 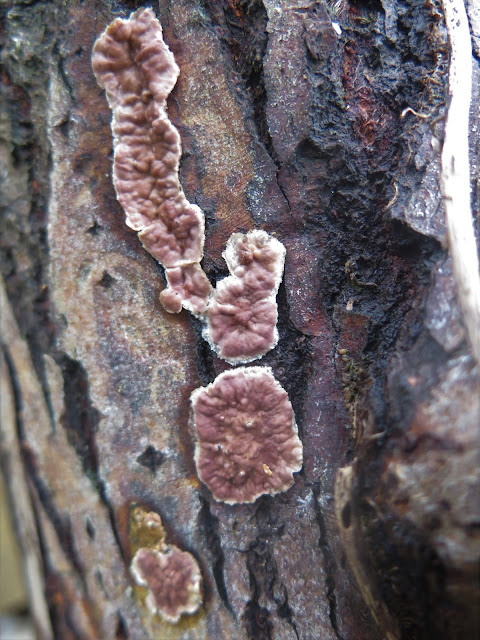 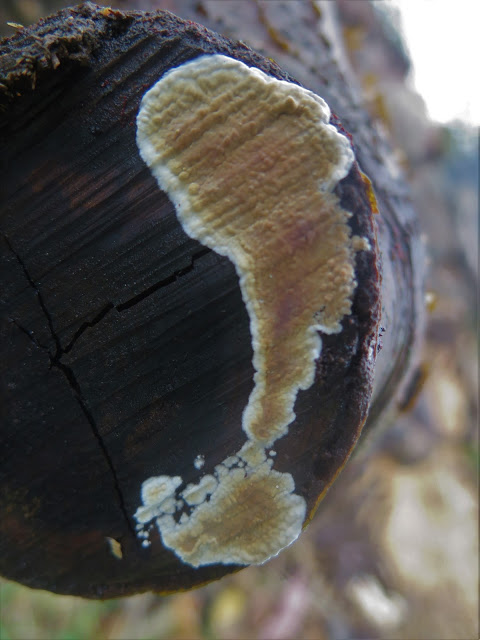 I am always on the look out for  the Face of Jesus  be it in my toast , coffee froth or  a pile of logs . I was  disappointed this time but I came across South America  from the times when it was still connected to Antarctica. ........ 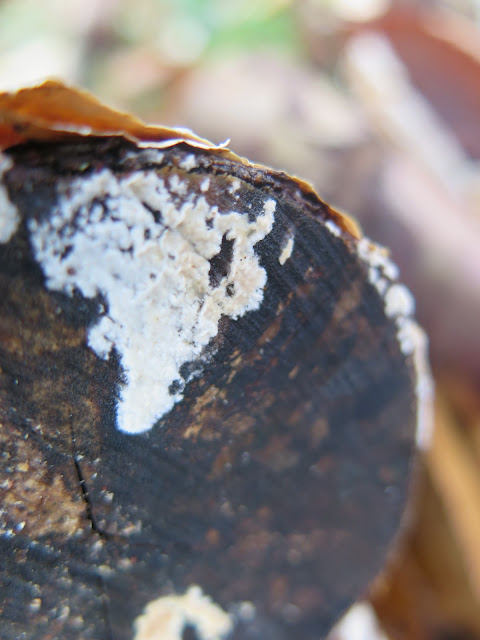 .....and Africa  with Madagascar missing  and a bit extra stuck on the west coast.

P.P. S  Please do all you can to support Extinction Rebellion.